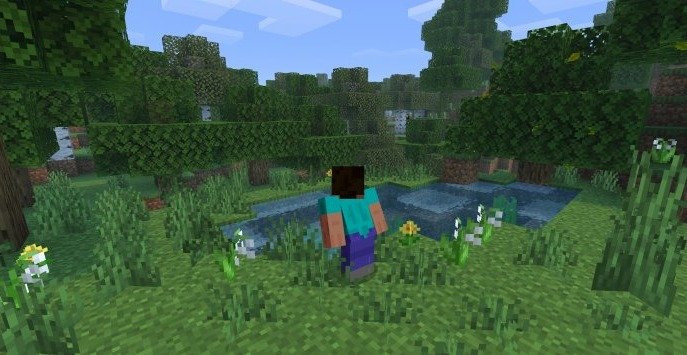 What the name implies, enhanced default keeps the basic appearance of the game while enhancing it with shadows, reflections, TAA, and even godrays. This is in contrast to other visual mods, which completely transform the look of the game. Since it requires very little processing power and can be configured in a wide variety of ways, even a potato can use it. In-game shader options include a fast and fancy profile setting, and users can also download presets to customize their experience. Since Fast is quite a lot faster than the Fancy preset, you should choose Fast instead of Fancy if you need all of the frames.

The Sildur's Shaders pack is a shaders collection with an emphasis on various customization options. Many of the shaders packs currently available suffer from severe constraints, such as being incompatible with operating systems other than Microsoft's or being able to run only on powerful computers. This shaders pack is compatible with the majority of operating systems, and it comes with a wide variety of editions that are designed to work with any operating system, Minecraft build, or processing specifications the player may have. There are a few different kinds of shaders, and each of those kinds has subtypes that fall under it. For instance, there is a set of shaders known as Vibrant shaders that contributes a graphical makeover to the overall aesthetic of the game. There are several different iterations of the Vibrant shaders, and they are referred to by names like Lite, Medium, High, High-MotionBlur, and Extreme. Furthermore, these choices only take into account the Vibrant shaders. In addition to these, there are Basic shaders, in addition to Light shaders. If you are someone who has been interested in the concept of shaders but has felt limited in your ability to use them because of your operating system or processing capabilities, experimenting with Slidur's Shaders is an excellent way to get your feet wet in the field.

Moving on to the actual shaders themselves, this shaders pack brings a plethora of graphical improvements to the game. These improvements range from straightforward additions to intricately designed additions. To begin, this pack includes dynamic lighting and shadows that can be adjusted. In the default version of Minecraft, light appears to be a function with only two possible states: either it is present or it is absent. Even though the game's brightness and color palette are always being updated, none of the mods appear to make use of the full potential that Minecraft's lighting system possesses. This modification takes a deep dive into the myriad of effects that something as fundamental as light can have, transforming a boring torchlight into a warm luminescence. This modification does justice to a number of aspects, one of which is sunlight. The sun is at its most powerful and energizing at midday, when it is directly overhead. The game now has more of a cinematic vibe thanks to the addition of a subtle touch of lends flare, which also seems to have been added. Instead of the sky simply turning orange, the sunset at the end of the day more closely resembles a real sunset. There is a smooth transition from the blue of the sky to the orange of the sunset, and the surrounding clouds have the same colors that they do.

Another component that is manipulated by this shaders pack is water. These shaders transform the typical appearance of water into one that is both more mysterious and more beautiful, very similar to the appearance that real bodies of water have. In the game, a small pond might look like a beautiful crystal watering hole, while a vast ocean might feel more like an unknown abyss filled with both wonder and terror. This shaders pack does a great job of complementing the numerous new features that the most recent major update to the vanilla version of Minecraft added to the underwater gameplay aspect of the game.

In conclusion, it is possible to activate or deactivate particular effects. It is sometimes in the best interest of the game's framerate to disable certain effects, despite the fact that these shaders add an incredible level of detail to the game's natural effects. This feature is a great addition to the already high level of accessibility that this shaders pack provides, and it is made possible by the fact that Slidurs' Shaders integrate the various builds of software and hardware that players have.